In 2008, Damien Leone introduced a horror icon that holds the potential to unseat some of the all-time greats of the genre. With his short-film The 9th Circle, Leone introduced Art the Clown. He would follow The 9th Circle up with an additional short-film titles Terrifier, and in 2016 release a feature length film also titled Terrifier (2016). Slowly, the Terrifier phenomenon started to take over the horror world. After  several years of the delays and a global pandemic, Damien Leone readied to unleash Terrifier 2 in October of 2022.

Those interested in the early days of Art the Clown will find The 9th Circle and the Terrifer short-film in the feature length anthology All Hallows’ Eve. This also includes an anthology finale that really shows Art the Clown in his brutal worst. Just saying, it’s worth hunting out All Hallows’ Eve rather than hunt down the individual pieces.

Who is Art the Clown?

As we discuss all the time, one of the most difficult things in all of horror is the ability to subtly combine horror and comedy. Above all else, horror fans demand to be entertained and together the combination of horror and comedy can bloody brilliant. However, when the mix goes bad, it goes way bad. The arc of Freddy Kueger makes for a great example. In the early days, the comedy was subtle and dark. Later, he became a caricature of himself with bad Don Rickles one liners. Fans exist all over the continuum between one extreme and the other, but at some point it becomes too much.

In creating Art the Clown, Damien Leone did something utterly fantastic. He created a horror villain without a voice.  Certainly, many horror villains have had not voice, but rarely did they deliver the comedic goods at this level. Picture in your mind the thing you fear most standing over a gelantinous pile of bloody innards while squeaking a bicycle horn. Leone proved in Terrifier that this imagery and physical comedy can fill a feature-length film. But… can it fill 2?

Where is Art the Clown

At the conclusion of Terrifier, Art the Clown (Once again played wonderfully by David Howard Thornton) had just blown his own brains out and had been transported to the morgue. Terrifier 2 begins from that moment as Art emerges from the body bag and starts thrashing the coroner. In a sweet bit of continuity, Art still misses one of his eyes from the events of the events of the evening. This leaves a great opening for an early demonstration of the power of horror comedy. Before Art leaves the morgue, he makes sure to grab some goodies on the way out including a bottle of acid.

This felt like a bit of an interesting curiosity as Art carries a massive plastic bag of murder implements over his shoulder everywhere he goes. Had he just pulled the acid out of his bag without the foreshadowing, the audience would collectively told themselves, “plausible”.

One year later, Sienna Shaw (Lauren LaVera), works on a Halloween warrior princess costume designed by her late father. inexplicable, both her and her brother, Jonathan (Elliot Fullam) begin having visions of Art both in dreams and waking reality. As Halloween night approaches, both of their paths cross with not only Art the clown, but his new sidekick, The Little Pale Faced Girl (Amalie McLain).

From a pure production perspective, Damien Leon surpasses the original Terrifier movie in just about every category. Overall film still retains that grainy 80’s patina, but the set design and cinematography by George Stueber has much more depth. The set designs feel less constraining and more realistic. The lighting feels more professional and immersive, especial in scenes washed out with fluorescent rave lighting. The casting choices and performances feel much more organic.

Lauren LaVera’s performance as Sienna is utterly fantastic. We would also like to shout out to Sarah Voigt as Barbara Shaw. Shemight be the most realistic portrayal of a modern single parent in the history of cinema. Once again, David Howard Thornton plays Art the Clown as only David Howard Thornton can do. He crushes the perfect mix of physical comedy and vicious savagery.

The music, directed by Paul Wiley, choices also lent itself to an 80’s Stranger Things vibe, even though the technology clearly indicates the modern age.

It should be noted that Damien Leone procured most of his funding for his film through Indiegogo. The films budget is a paltry $250,000. To be totally honest, we are a bit dumbfounded how a movie of this scale and caliber can be created in 2022 for that kind of scratch. It boggles the mind how polished Terrifier 2 is considering the financial limitations.

How Long Can A Splatter Movie Be

The run time for Terrifier 2 comes in at an amazing 2h18m. One might ask, what the literal hell could Damien Leone do with over two hours of screen time. Honestly, he does quite a lot, and considering the epic length of the film, Leone manages to keep it fresh for the most of the film. Still, at times it does feel a bit exhausting to take in one sitting, especially when your significant other than wants to strangle you for subjecting them to such violence, but good for Leone for swinging his spiked table leg for the fences.

One the reasons he gets away with it is because he knows what his audience came to see, VIOLENCE. He burns a significant amount of frames in an extended dream sequence that seemingly goes on for forever. He also revels in the slaughter of Sienna’s best friend, Allie (Casey Hartnett) tp the extent that it hurts ones soul to see it carried out. It’s both something to behold and something to make you sad in inside because you suddenly realize that you are the type of person that would willing pay to see this.

Speaking of brutality and excessive amounts of gore, let’s be honest everyone in the crowd knew what they were in for, and Damien Leone would not fail to deliver. In addition to directing and writing the screenplay for Terrifier 2, Leone also supervises and and directs the special effects unit. Clearly Leone instructed his team that more is better than great. That should not be take to suggest that the special effects are bad. They are not, but for the most part, realism gives way to volume. To meet the demands of the fans, he produced a TON of the red stuff.

I hate to bring up again, my choices in entertainment cause my loved ones to wonder what is wrong with me.

Show Spoilers
Clearly there’s something supernatural about Art and the lack of explanation is killing me. The recent hammering of our previous reviews for All Hallows’ Eve and Terrifier (2016) indicates that general public might also looking for more mythology. Having seen then entire character Arc for Art we see a bunch of stuff that confirms his supernatural nature.

That’s probably not even an exhaustive list. We think that Terrifier 2 finally gave up some clues. In the plot, Sienna’s father commits suicide. Prior to killing himself, he suffered from a brain tumor that gave him visions. Before he died, he documented these visions in a notebook that he left behind. In that notebook we see a few things. First, he designed a warrior angel costume for Sienna. Second, he draws a picture of Sienna holding the head of some sort of demon that IS NOT Art the Clown’s head. Finally, he bestows upon her a magic sword that not only resists damage, but also revives Sienna from the dead. Our hot-take right now is that Art the Clown is the human personification of Satan himself and Sienna is the human personification of an angel. Art summons Sienna in order to start the final conflict between good and evil. Round 1 goes to Sienna. Of course, we’ll have to wait unto Terrifier 3 to find out more. 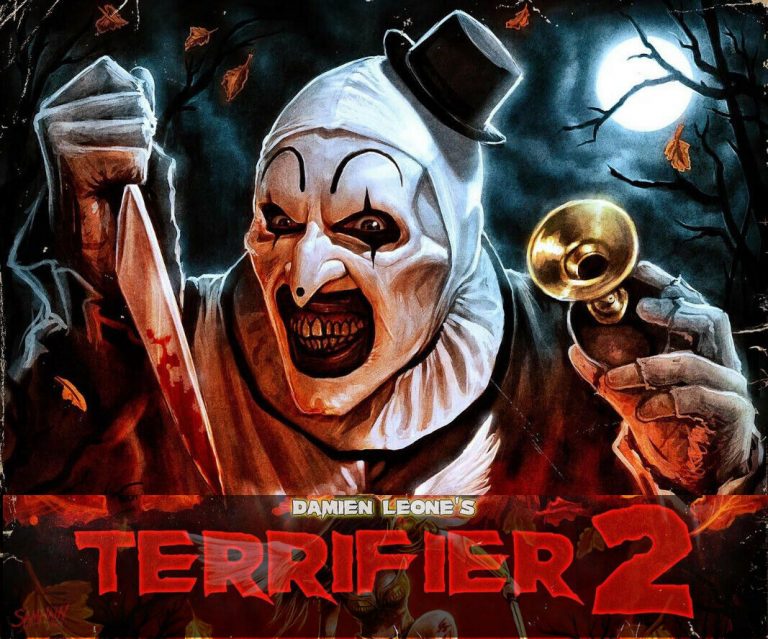 At Malevolent Dark, we try not to be fanboys, but wow, this film absolutely crushes expectations. We really like the original Terrifier, but Damien Leone’s new installment goes above and beyond in almost all aspects. For anyone that read the spoilers, it writes some serious checks that may prove hard to cash in the inevitable follow-up, Terrifier 3. As a stand alone work, Terrifier 2 deserves recognition in the highest circles of horror greatness. The word exquisite comes to mind.

Terrifier 2 is a well paced, gore heavy and packed with humor as black as Art’s heart. We think one provides a perfect fit for anyone that enjoys simple pleasures like House of 1000 Corpses or The Texas Chainsaw Massacre and certainly anyone that enjoyed the original Terrifier episodes.

Make sure to hang around for the mid-credits scene. You will not be disappointed. There might be a Chris Jericho Terrifier 2 sighting, I don’t know.

Teddy Told Me To (2022) – A fluffy bloodbath from Tom Devlin