A simple Internet search of the most impactful horror/suspense films of all time will quickly reveal Alfred Hitchcock’s 1960 masterpiece Psycho. To this day, Psycho still holds some of the most recognizable iconography in all of horror. It’s the film that made the shower the most terrifying place in the home. Then against all odds, Richard Franklin took the franchise head-on when he directed Psycho 2 (1983). While panned at the time, many regard it to be one of the great unheralded sequels. Psycho 3 aims to continue that legacy.

Three years later Norman Bates himself, or rather, actor Anthony Perkins, would take another run at Psycho franchise with Psycho 3 (1986). Not only does he act the part, but he takes the helm as director. Would Anthony Perkins be as good behind the camera as in front? 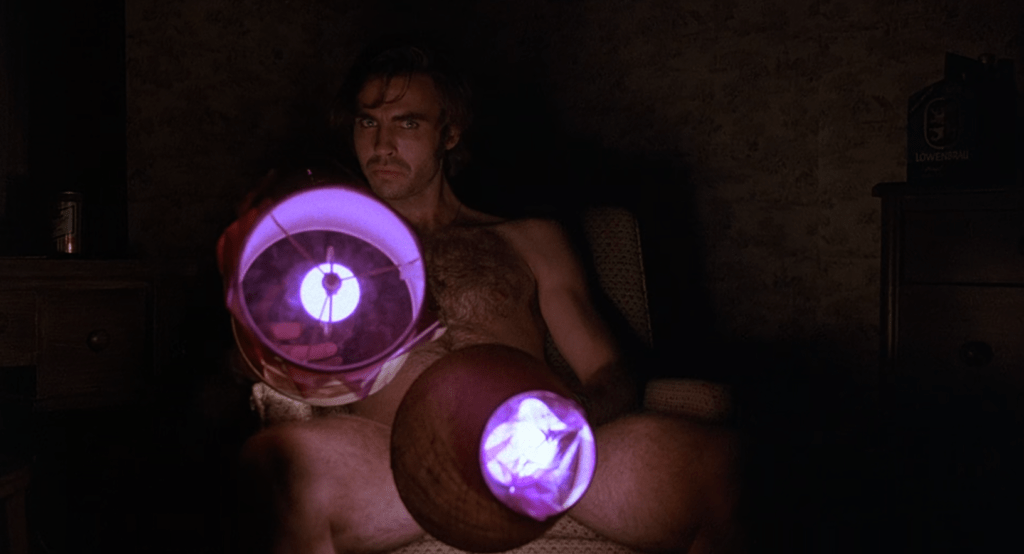 Picking Up Where We Left Off

Those that remember the shocking ending to the previous film, Norman Bates just found out that the desiccating corpse that he called his mother was not in fact his real mother. A woman named Emma Spool dropped the revelation as she explained that she was not only the murderer but she was also Norman’s real mother. Norman appears to be taking the news rather well until he flattens her head with a shovel. Norman promptly stuffs her with sawdust, preserves her corpse and puts her dead body back in command of his life.

This all makes for an interesting start to the film because its the first film that lets the audience know Norman’s exact state of mind to start the story.

It wouldn’t be a Psycho movie without a steady supply of traveling outsiders to make their way to the Bates Motel. This time, a suicidal nun named Maureen Coyle (Diana Scarwid). She questions her vows and her own morality as flees from a deadly accident at the convent. On her travels, she runs into the sleazy Duane Duke (Jeff Fayhey). He doesn’t waste a moment before trying to take advantage of her. Both characters wander in the Norman’s world at the hotel. It doesn’t take long before the killing begins.

Very rarely does an actor become so inextricably merged with a role more than Anthony Perkins’ bond to Norman Bates. No one in their right mind could question his reprisal of the role. What did come as a surprise was his directorial debut. Clearly both a talented man and a student of film, Perkins honestly does a really good job. He lacks the visual flare of Alfred Hitchcock, and Richard Franklin’s perfection in imitating art. However, he competently commands the camera and manages the navigate the story. Psycho III suffers much more from deficit of ideas and a lackluster script than Perkin’s direction.

Cinematographer Bruce Surtees provides enough technical backbone to get the job done. Although, he and Perkin’s insistence on recreating Hitchcock style shots feel a bit forced and somewhat derivative.

If Perkins’ approach had any flaws, they are found in the straight forward execution through a predictable plot. By showing his hand with respect to Norman’s unstable state of mind, it follows quickly that he commits the murders. Writer, Charles Edward Pogue attempts to create a love story between Maureen and Norman, but the relationship never really shows a spark. The awkward incompatibilities pile faster than Pogue can clear them leaving their love story to languish. It never really feels authentic and fails to build sufficient emotional capital with the audience.

Should It Have Been Made?

It could be said that this film should have never been made, but Richard Franklin made that a very difficult proposition. After the fantastic, yet topsy-turvy, ending to Psycho 2, the world had to see what happens next. Unfortunately, as it turns out, there wasn’t a whole lot to say. We pretty much knew that Norman would fall under the spell of his newly found mother, Emma Spool. We knew the murders were going to start again. For those that hate loose ends, this one at least tries to tie them up neatly.

Additionally, the film tries to unwind the story that names Emma Spool as Norman’s mother. I found that the rushed explanation by a fleeing reporter to be kind of an awkward, “oh by the way”. They might as well just ended the film a block of text explaining what happened. Despite those missteps, Psycho 3 ultimately leads to a finale that COULD have closed the series once and for all. Unfortunately, this would not be the last in the Psycho franchise.

Putting It All In Context

After watching the film, it becomes pretty clear that Psycho 3 is the lesser film of the first three in the series. It suffers from a pedestrian plot, and fails to capitalize on early character investments. In our opinion, the entire Maureen Coyle storyline sputters about half-way through the film, and by the time that she meets her fate, nobody cares. She certainly pales in comparison to Meg Tilly’s formidable role in Psycho 2. Anthony Perkins does an admirable job reprising the role of Norman Bates, but something sees just a little bit less authentic about the performance.

However, Psycho 3 does do a few things well. The character of Duane adds a lot of spice the to film and he forces the audience to unravel whether or not he’s a harmless jack-ass, or something more sinister. Also, we get a heaping helping of Norman Bates wielding a butcher’s knife and an old wig. As mentioned before, the entire affair gets a professional cinematic treatment and enjoys periodic instances of great cinematography.

At the end of the day, Psycho 3 is probably required viewing for anyone that loves the franchise. As long as expectations are tempered, it should be just good enough.