The Halloween franchise, maybe more than most attracts some of the most opinionated fans in all of horror. It appears that the most recent release, Halloween Ends (2022) polarized the horror community. The being said, we at Malevolent Dark though it might a be good time to discuss our general outlook. We review movies. That means that sometimes we might have a difference of opinion with the rest of the world. Other times it might mean that in being honest about our opinion, we might stomp the guts out of something that you love.

We appreciate you and your opinion. It’s our differences in opinion that make the horror world fun.

*** This review has MAJOR SPOILERS. Do not continue if you intend to watch. ***

Those that keep up with Malevolent Dark know that our overall opinion of the Halloween reboot franchise has not been kind. Overall we feel that the sequels didn’t need to be made. Since he insisted they should be made, David Gordon Green owed the Halloween franchise a boost to the mythology. He failed to deliver anything of substance through Halloween (2018) and Halloween Kills (2021) worth the trouble.  It wasn’t so much about the quality of the movies, but more about dereliction of duty in moving the legacy forward in a meaningful way.

The biggest danger is you don’t want to know more about Michael. Even though we’re intrigued by Michael and we love him as a character, we don’t actually want to know more, because then he’s going to be less scary.

The aforementioned quote says volumes about why he chose not to advance Michael’s story, but we’ll revisit later when we cover Halloween Ends biggest WTF moment.

The best place to start is the beginning. David Gordon Green’s film begins with a young man named Corey Cunningham on Halloween night. He works with the parents of a young boy named Jeremy as they hand over responsibility to Corey so they can attend a Halloween party. In a buildup suggesting that Michael Myers has returned, Corey gets locked in an attic. Frantically trying to get out, he kicks open the door knocking Jeremy over the rail to splatter 3 floors down… directly in front of his parents.

Green opens the film with suspense and he ensures that it is well executed. The cataclysmic shock of Jeremy’s death and the anguished wails of the parents make it completely horrifying. It would make for a pretty fantastic opening had it not set a terrible precedent. This film is not about Michael Myers, it’s about Corey.

Corey, while acquitted on charges of manslaughter, is never accepted by the community. He becomes a pariah and the target for abuse. Slowly over time his contempt fort Haddonfield builds until one fateful night when bullies beat him up and throw him over a shallow bridge. A figure in black drags Corey into the confines of the city sewer. Michael Myers has been hiding there since the night that evil didn’t die.

In a moment that could only be described as ill advised, Michael Myers stares deep into the eyes of Corey Cunningham and sees his internal strife and struggles. He reads the deep dark pain within Corey’s soul and deems him a kindred spirit. They use this connection to create some kind of unholy murder alliance. WHAT!?!?! I would explain how absurd this is if I thought I should need to.

The biggest danger is you don’t want to know more about Michael. Even though we’re intrigued by Michael and we love him as a character, we don’t actually want to know more, because then he’s going to be less scary.

So wait, the guy that suggests that we should be wary of offering too much detail to the inner working of Michael Myers reveals that Michael has a secret power to stare into the souls of troubled youth. He uses this super power to find a new BFF?

Anyone that loved this movie exited this dissertation already. Hopefully some stuck around because I now have to thread the needle of nuance. I don’t hate all of this. The strategy is sound but the tactics are abysmal. I actually love the idea of Corey slowly descending to the dark side. I even love the potential of Corey eventually taking the mantle of Michael Myers eventually. However, I can not handle the idea that Michael Myers has the emotional depth to foster a human relationship with another man like a blood splattered Tango and Cash.

This plotline could have worked. Considering the fact that Halloween Kills was essentially a plotless money grab. David Gordon Green could have seeded the Corey story early and nurtured it into a grand conclusion to his trilogy. The lack of foresight could only be explained one way. The production team didn’t have a plan. They found mild success with the first one, pasted some connective tissue in place to imply a third one, and then stared into the abyss. And then the abyss stared back into them and demanded that Michael have a BFF.

Given time to grow, this story could have worked because it would have been anchored it to the very strong performance of Rohan Campbell. This guys suckers the audience in with his innocence as the Halloween babysitter. He doubles down as the sympathetic young man carrying the hate of a whole town on his undeserving shoulders. He then completes the trifecta with his cold lifeless stare and exuding evil. This character works, but it would work better through slower development across multiple films. There simply isn’t enough time to complete the story arc in 90 minutes.

As good as Rohan portrays Corey, Andi Matichak’s portrayal as Allyson really makes it all work. Her relationship with Corey forms one of the few real human relationships in the history of the Halloween Franchise. Her path into Corey’s world of darkness feels all too authentic. David Gordon Green really finessed this into the film extremely well. Andi Matichak puts forth her best performance in the trilogy. She shows a depth of character lacking in the previous portrayals. Her love and disdain for her grandmother drives both of their characters forward.

Again, this unlikely story of love could have blossomed over the course of two or three films. Any of it would have been better then the man-plugs they slaughter in the first two films. Had it happened that way, Halloween and Halloween Kills might have more impact.

Likewise, Jamie Lee Curtis delivers the most solid and thought provoking version Laurie Strode ever in a Halloween movie not directed by Rob Zombie. I called her Booming Granny in Halloween (2018) because she carried the Sarah Connors archetype. To be fair, she excelled at the role, so no criticism there. It was the predictable female warlord cliché that caused me to groan.

In Halloween Ends, Laurie knows that Michael still lurks in the darkness of Haddonfield, but she refuses to let the Boogeyman run her life anymore. She retires to beautiful home, completely removed from her previous fortress of doom. Her she tries to rekindle her relationship with Allyson, the only person she has left.

Laurie at first welcomes the fact that Allyson found love, but as she looks deeper into Corey’s mental well-being she becomes concerned. She claims that she can see the same darkness in Corey’s eyes that she saw in Michael’s and warns Allyson to stay away. Obviously this devolves into another standard trope, but their triumvirate of acting prowess overcomes. I’ll talk more about the ending, but Jamie Lee’s performance in the final moments of the film prove to be some of the best ever.

The Ending We All Wanted

Despite the clear problems with Halloween Ends, the film ultimately makes it way back to exactly where everyone expected. Had it not, riots might have broken out in the street. Considering my general malaise for Halloween Ends as a whole, I found the ending to be absolutely superb. The path to the finale feels a bit wacky, but let’s assume the journey was worthwhile up until this point. Michael Meyers makes his way to Laurie’s home. Strangely, Halloween Kills hammers the point home that there is nothing special about Laurie and that Michael couldn’t care less about her. Yet, he implausibly ends up back her house through a series of unfortunate events.

One of the first things that stands out about the final conflict is the simple honesty and realism. There are no trap doors, no hidden flamethrowers, just good ole honest hand to hand combat. All of the blows seem well within human capabilities. With the exception of Laurie’s strength seemingly on par with Michael’s, most things check out. Eventually with a bit of luck, Laurie pins Michael to the table with strategically immobilizes Michael with kitchen knives. Then, she utters the single greatest line in Laurie’s history:

For 44 years, I thought you were the Boogeyman but you’re just a man who’s about to stop breathing.

With the help of Allyson, they overcome Michael as Laurie nonchalantly slices his wrist in a final fatality. To be honest, that ending would have been satisfying enough, but there’s more. They strap Michael to the roof of the car and take his lifeless body on a procession through town to the junk yard. In one of the most memorable final kill scenes in horror history, feed Michael into an industrial chipper shredder in full view. While Laurie stands over the body, Allyson throws the switch. Final, cathartic, magical.

Laurie finishes a memoire of her life with Michael and closes the lid on her laptop. In the final frames, Deputy Frank Hawkins (Will Patton) stops by. Presumably Laurie and Frank ride into the sunset together.

The ending gets everything right.

Resolving The Conflict Within

Pulling it all together, Halloween Ends is a poorly constructed bookend to a poorly conceived trilogy. Yet, David Gordon Green made the film with some very good component parts. I am unable to conjure another more confused movie that ends as wonderfully as this one. The truth is that it is a poor ending for Halloween Ends while simultaneously being a fantastic ending for the series. Had this ending been tacked onto the end of one of the previous 2 films, either one would have been much more memorable series. Really, why does everything have to be a trilogy?

If nothing else, the film ended conclusively (“Hold my Beer” says Jason Goes to Hell). Exhausted, we at Malevolent Dark celebrate that this experiment in Michael Myers fandom finally concluded. I fear my solace will not last forever.

In closing, we really liked the perspective of @VicsMovieDen. We thought he summed the whole thing up in less than 140 characters. Click on the link below and give this guy a follow. 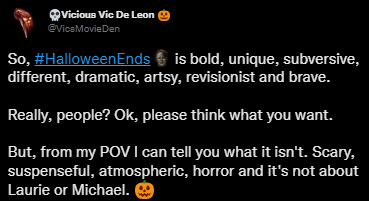