Am I biased? Absolutely. Nautical winter horror is my second favorite niche genre and this checked a lot of boxes for me.

Was Freeze (2022) objectively good? What is objectivity if not implicit bias?

Let’s get into the synopsis before I get too carried away.

Directed by Charlie Steeds (Werewolf Castle) in production with Dark temple motion pictures, this film is set on the frozen seas of Norway aboard a retired warship (the Innsmouth) to document the whereabouts of a previous expedition that has been missing from its charted course. Captained by Mortimer (Rory Milton) the Innsmouth is said to be unstoppable in its pursuit given its wartime history. This is nearly immediately proven false when the ship becomes lodged in ice. With a thought to potentially dig themselves free, the crew finds out quickly that they are not alone.

Ichtyoids, a Lovecraftian-styled creature native to the ice and no friend of humans invade the ship sending the crew into survival mode. Deciding ultimately to abandon the ship, for the time being, Captain Mortimer leads his crew plus a newly discovered female stow away to a series of caves in the nearest mountainside.

Progressing through the plot we watch the characters settle into the uncomfortable reality of salvation, injury, frostbite, and, of course, their newly discovered place in the food chain.

What really kicked this into high gear though was the decision made by Captain Mortimer to abandon hope of escape altogether after discovering his old friend and Captain of the ship they were meant to save, Captain William Steiner (Tim Cartwright) divulges his plan to bring the Ichtyoid’s home as his discovery and release them on the world.

Unable to talk his old friend out of what he believes to be mania, Mortimer realizes with stark clarity that, for humanity’s sake they can’t allow that to happen, ultimately forfeiting his life and the life of his crew. He entrusts the destruction of the Innsmouth to a medic (Johny Vivas) and sponsor Gideon (David Lenik) but Gideon proves to have devastating reservations.

Even before we delve into the thick of the plot, suffocating tension builds as a foundation between the mixing classes of the crew and their hidden agendas, superstitions, and real-world biases.

This movie stuck quite firm in its Lovecraftian nature capitalizing on the nostalgic tropes we’ve come to know and love from the genre. An isolating accident, a garish book of cryptids, a cult of loyal followers, and of course, the monsters themselves. Despite this dedication, it didn’t rely on it too harshly. The choices made by the characters, cohesively lined up with the narrative that whatever they may have chosen differently would have ultimately ended the same.

My personal favorite character was the stowaway. Played by the talented Beatrice Barrila as Carmen she is the epitome of a woman ready to fight for her right to live even while others find comfort in their demise. Set initially upon finding her brother she is quick to acclimate to the harsh new reality she is thrown into, ultimately becoming the favorite final girl. 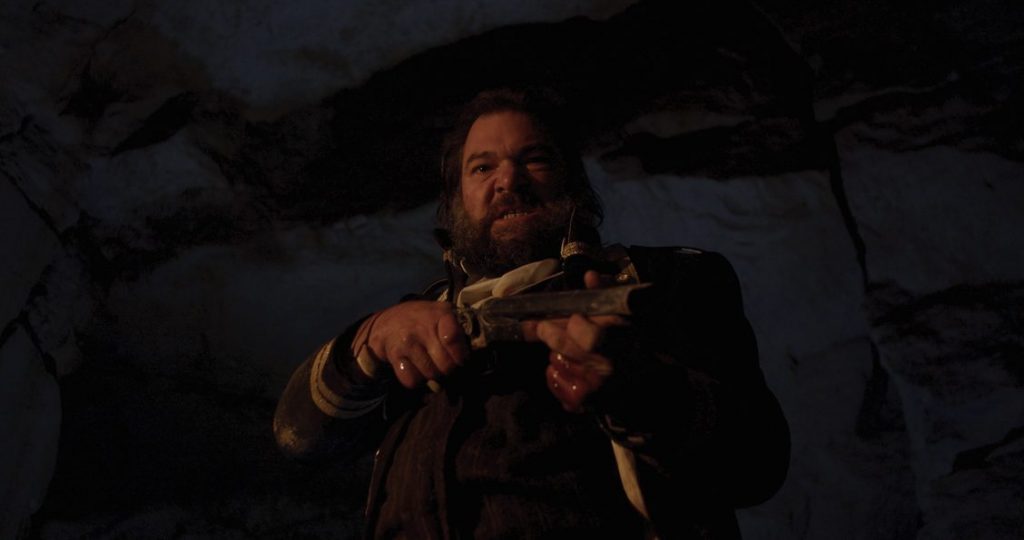 Now let’s talk about me.

If you’ve read any other reviews by me you know I love history. Watching the world through the eyes of modernity is a hobby of mine especially when it comes to the macabre. This is no different.

Ever since I was little I have been obsessed with the shipwreck the Endurance. An expedition led by Sir Ernest Henry Shackleton to explore the harsh lands of Antarctica with a crew of twenty-seven men (and a cat). Their ship, (much like the Innsmouth) found itself sheathed in ice without hope of escape.

Surviving for months the crew watched their beloved boat get crushed by ice and slowly sink along with their hopes of completing the expedition. Destitute but determined to survive they made their first journey of three hundred miles and sixty miles across the ice to Paulette island. Under severe weather, starvation, and limited resources they sailed, trekked, and survived years looking for help. Ultimately the crew broke apart, half making the nine-hundred-mile sail in the Antarctics’ worst seas in a lifeboat to South Georgia Island to seek rescue. So on, and so on.

This doesn’t completely connect so I won’t continue on it long, but it does play into why I liked this movie so much.

See, Socioeconomic status, personal biases, and extenuating crises will never not strip a group of force proximate human beings to their barest moral bones but force some to break beyond repair. Even ones who claim to be sane.

That is without actual monsters. With so the stakes elevate from existentialism to derealization shattering any moral codes or personal boundaries. Elevated adrenalin, delusion, extreme preservation, and severe weather are the perfect cocktail for mania.

This is depicted nearly perfectly in this movie.

Here is the thing about the creative choices made for this film though. It’s been made a million times before. The plot was a beast horror hallmark and the relationship dynamics are familiar, to say the least.

We have the boyish lovestruck artist paralleling the self-preserving rogue. The woman stowaway, paralleling the superstition of a woman aboard a ship. The pompous, “daddy’s money got me this,” aristocratic paralleling the honorable captain. And the outlining loyal cook.

The thing is, it worked for this movie. The reason being is, it gave us a familiar set of characters so we could focus more on the outlining circumstances without getting hung up on idiosyncrasies. Nothing can kill the vibe faster than unnecessary complexity.

Furthermore, I love hallmark horror. Give me a plot I already know and remind me why I love it. It accomplished that and it feels like that was exactly what it was trying to do.

Side note, I also watched it with my partner who was obsessed with the little references to Lovecraft from Mountains of Madness to the Daegon, too, of course, the Innsmouth. They found it fitting to the creatures presented and the overall feel of the film.

Lastly, the movie was just a good time. It was aesthetically pleasing to the eye, it felt cold and close enough to reality to make you shiver just a little.

August Underground (2001) – Sickest Film Ever Made In The US? (Explicit)

Teddy Told Me To (2022) – A fluffy bloodbath from Tom Devlin

Brams is a ghost stuck in a bone house. It wasn’t the eeks of the ghouls that captured Bram’s adoration for the macabre, but the creaky floorboards, candles that wave at you when you pass and the lives left to be explored. Now, as retired spiritualist they spend most of their time exploring abandoned buildings and studying creative writing. Paranormal horror is their specialty, but they often dabble in cultish and beast subgenres too.
Subscribe
Close
Processing…
Success! You're on the list.
Whoops! There was an error and we couldn't process your subscription. Please reload the page and try again.