Ever since the release of the Walking Dead TV series, there has been no shortage of top 10 zombie lists on the Internet. Among them are the usual suspects, Dawn of the Dead, Zombie, Night of the Living Dead. Movies like Dead Snow are way over represented. Occasionally a new perspective like Dead Girl (2008) nabs a spot. However, one film that often evades these lists happens to be a personal favorite of mine.

I am referring to the 1972 Bob Clark classic, Children Shouldn’t Play With Dead Things. Written by both Bob Clark and Alan Ormsby, this classic zombie tale exudes its non-existent budget. Despite that challenge, this film possesses an excess of old-school zombie charm. 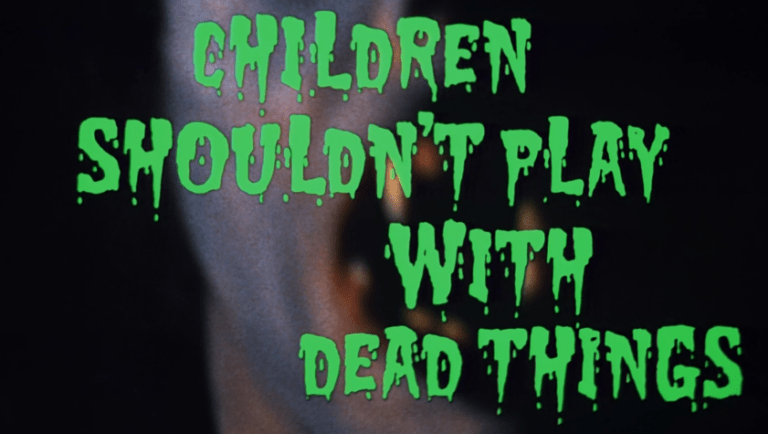 Going to the Video Store

Those lucky enough to grow up in the pre-Blockbuster era of video stores also remember bringing home a horror videocassette to find the first 10 minutes of the tape filled with previews of other horror movies. This served as a lifeline for horror fans. We all had limited access to information. Consequently, If you didn’t know someone that knew, it was nearly impossible to find out. It was during this glorious 10 minutes that I was first turned-on to Children Shouldn’t Play With Dead Things. The advert was strange and quirky. It portrayed a cast of characters disrespecting a corpse in an old cottage. The corpse eventually gets its revenge. I had to see this film.

The film begins with apparent ghouls digging up a graveyard. The music is eerie and thick fog rolls over the gravestones. After pulling a corpse from its grave, one of the tomb raiders climbs in the coffin while the other covers it with dirt. While simple, the opening perfectly symbolizes the best that this film offers. The atmosphere is dark and foreboding. Frogs, crickets and howls hang in the air. The title card is one for the ages.

After the opening credits, the action shifts to a boat pulling into a dock on a small dark island shrouded in dense fog. A cast of characters that look like they just stepped out of the Mystery Machine land the boat. Three men and three women step onto the dock. They are all members of an acting troupe. Alan, played by Alan Ormsby, directs the troupe. He uses his lofty position to threaten anyone that doesn’t go along with his plans. He, leads the pack through an old graveyard to an abandoned cottage. The group breaks into the homely cottage and sets up camp. When settled, they return to the graveyard where Alan intends to raise the dead.

When they arrive at the graveyard, Alan asks the men to dig up one of the graves. Upon completion, they find a rotting corpse sitting peacefully in the coffin. As on of the man reach down to pull the corpse from the coffin it screams to life, petrifying the group. Quickly, they realize that it was all a masterful prank. Everyone’s pissed, but what are they going to do? Alan threatens peoples careers when they try to leave. Alan still has other plans.

At midnight, Alan demands that the his partners retrieve the original body that occupied the coffin. The body is that of a man named Orville Dunworth. Orville serves as the centerpiece for the ceremony. With an envelope of dried babies blood and a book of ancient incantations, they perform a ridiculous ceremony. Nothing happens. Val, Valerie Mamches,  chastises Alan, and retorts with a summation spell of her own.

Alan Invites Orville Over for Drinks

Still, nothing appears to happen. Not to be outdone, Alan brings Orville’s corpse back to the cottage. Even though he promised Anya, played by Anya Ormsby, that he would not embarrass Orville, that is just what he does. It begins with a mock wedding ceremony between Alan and Orville. Alan and select members of the group continue poking fun at the corpse while in the cemetery something begins to stir. Thunder rumbles ominously in the background. Alan continues his show of dominance by forcing the women to interact and perform for Orville. Likewise, Alan’s cruelty escalates. Eventually Anya begins to hear the dead speak to her. They tell her that they are coming.

Meanwhile, in the cemetery, the dead rise and they waste no time. These zombies are not supercharged like in 28 Days Later, but they have more gas than Romero zombies. The entire cemetery crops up in mere minutes and they consume one the lackeys instantly. The other manages to barely escape to warn the others. Just when the troupe is ready to ditch Alan and make for the boat, the zombies surround the cottage. Using their strength and numbers, the zombies violently attack the cottage. Alan’s dominance unravels as quickly as the situation, requiring Val to take command. After a deadly failure sending Paul out to get help, the zombies breach the perimeter.

Once inside, the situation deteriorates quickly. One by one they get picked off as Alan cowers more and more. Alan tries to invoke a counter spell to send the dead back to their graves by burning the babies blood, but the spell requires that Orville be returned to his grave. That is just not possible. The zombies appear to retreat and the survivors make a run for the boat, but are ambushed.

Only Alan and Anya make it back to the cottage, but the zombies are inside. He backs his way up the stairs, even throwing Anya to the zombies to get a moments separation. In a brief moment of dark comedy, zombies look at Alan as if to say, “What a dick!” before shredding Anya. Alan slams the upstairs door, but unfortunately forgets where he last left Orville.

After Alan’s demise, the zombie quietly make their way to the boat, launching in silence as the credits roll in silence.

In my mind, Children Shouldn’t Play With Dead Things is a veritable classic. While it fails to achieve the heights of The Evil Dead or Dawn of the Dead, this film does some things extremely well. Most importantly, Bob Clark creates a brooding and chilling atmosphere. Using a foreboding soundscape, shadows and fog, he turns a cheesy bundle of fake tombstones into a terrifying backdrop. There is a prescient feeling of constricted space. Likewise, the cottage confines are tight, and claustrophobic. As the zombies rampage, there is a real sense of danger and hopelessness.

The Film Has Some Bumps…

Overall, script comes off hokey, and the costumes literally look like they were lifted from a Scooby-Doo episode. The acting feels contrived and amateur. However, Alan Ormsby does such a great job at being despicable, that the audience can’t wait for him to get his due. As for the zombie themselves, the makeup isn’t great from a pure practical effects perspective, but it proves very effective.

Every low-budget film suffers from one limitation or another. It is up to a great director to find their strength and exploit it. The predicament that Bob Clark creates feels far more hopeless and harrowing than anything that Romero did with Night of the Living Dead. Children Shouldn’t Play With Dead Things is arguably 100 times better than garbage like Burial Ground: Nights of Terror.

I still remember how I felt at age 10, looking out of my back window after watching Children Shouldn’t Play With Dead Things, knowing that a cemetery lies just on the other side of the woods from where I grew up. I highly recommend this film for any fan of the zombie genre and horror fans in general. It is another prime example of brilliance coming from scarcity.

Bob Clark and Alan Ormsby would go on to recreate this magic with other classics like Deranged and Deathdream.

Bridge of the Doomed (2022) – Romero Style Zombies and Military Action